I am trying to fit what I thought what a super simple intercept-only model with two grouping factors (let’s call them study and species) that I would call `crossed’… and it takes forever to run in rstan (where we started) or rstanarm (shown here for ease and the hopes someone will see what we’re missing), and has poor convergence (sad Rhat, neffective well below 5%).

Any thoughts would be most welcome! BTW, we think this is may be the problem underlying Issue with chain mixing and low n_eff for joint model but we’re not yet sure.

Have you checked that your study and species variables are in the correct format? Stan models take in integers as the group names, but I think brms and rstanarm might need them to be factors.

Oh, good point. I will try that, but we also had the same problem with the Stan version.

So, here’s the Stan version. (I wonder if I just haven’t these types of models before and they’re more persnickety than I think, but I would like to understand the persnicketyness.)

Hierarchical models in Stan (and Bayes generally) can have difficulties with sampling and convergence when specified directly, instead it’s recommended to use a non-centered parameterisation which constructs the parameter as a function of a standard normal. There’s more background for this in the User’s Guide.

For parameters which don’t have a lower bound, you can implement this very simply using the offset and multiplier syntax without changing anything else in the model:

However for parameters with a lower bound (e.g., sigma_sp), you need to use the ‘manual’ approach which specifies a standard normal parameter with an appropriate lower bound:

See this post for more background on how these constraints are derived.

Additionally, with stan models in general you will want to use:

As it is more efficient to work with vectors than arrays of real. This also allows you to vectorise your likelihood, so you can instead write:

Without the need for the loop or the ymu variable

Thanks! I am used to doing an NCP when I see structure in the log posterior that suggests I need one (when we don’t it makes my models run slower) … I haven’t seen that yet, but I can dig deeper. Because we’re getting similar failures in rstanarm where I believe NCP is the default, any other ideas you have of what to try are most welcome.

I like these models too! I replicated your result (bad, slow sampling) on my laptop and started playing around. Here are some ideas; I hope something here is useful to you!

Anyway, i realize that 5 questions don’t make an answer, but hopefully something in there is useful! 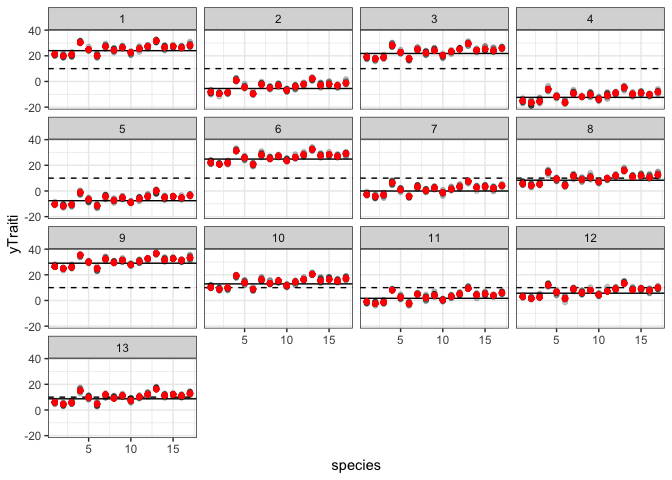 Hierarchical models are often problematic, but assuming that any problems are due to hierarchal structure just leads people down unproductive rabbit holes. In practice one shouldn’t attempt any of the usual strategies for moderating the degeneracies inherent to hierarchical models (in particular normal hierarchal models) without first verifying that those degeneracies are the problem.

In this case running the fit doesn’t show any divergences nor E-FMI warnings, which indicates that there likely isn’t any hierarchical structure at fault here. This is consistent with the fact that with 50 observations in each factor level, and a relatively small measurement variability, the realized likelihood function should be narrow enough to inform all of the factor level parameters strongly enough that the centered parameterization assumed in the model is optimal. It’s straightforward to verify by removing the hierarchal priors entirely and running again – the same problems arise!

So what else could be going on? The effective sample size warnings should be ignored until all other diagnostics are clear, which means that we prioritize the Rhat warnings. Because these show up for all of the parameters it appears that the four Markov chains run by default in Stan aren’t overlapping much at all!

Looking at the number of leapfrog steps across all four chains

we can see that the sampler is utilizing very long numerical trajectories. This suggests either a very degenerate posterior density function or poor adaptation.

which shows some variation between the chains.

We also want to look at the adapted inverse metric elements,

This reveals even stronger variations in the adaptation arrived at from each Markov chain.

This provides more evidence that Stan is having trouble adapting Hamiltonian Monte Carlo well enough, and each trajectory is exploring only the very local neighborhood around each initial point. This is consistent with the trace plots, for example

Okay, so why is the adaptation ending up in such a bad sampler configuration? In this case I think that, perhaps ironically, it’s due to the glut of data! With so much data the posterior is extremely narrow, and with a population scale of 10 for the individual species and study parameters the narrow posterior is likely to concentrate outside of the [-2, 2] initialization window that Stan uses by default. This means that Stan is trying to initialize very far away from the posterior typical set which makes the adaptation problem really, really hard.

Simulating new data with a measurement variability of 10 instead of 1 provides supporting evidence for this. The larger variability results in wider likelihood functions, and hence wider posterior density functions, that more strongly overlap with the default initialization window.

Here we can initialize around the point estimates, for example

which should drastically reduce the adaptation difficulty, at least if my hypothesis is correct. For more complicated observational models this prescient initialization might not be possible.

Thanks! This answer makes sense and is very helpful, especially the walk through of warnings (hierarchy of warnings) and diagnostic plots.

We’re still having a debate though on this issue of multiple modes, specifically whether these may be present because we are trying to separate out the variance of two separate effects (here: study and species). Signs here point to poor adaptation, but is there a way to also check for evidence of metastability or rule it out?

we are trying to separate out the variance of two separate effects (here: study and species)

One strategy that is sometimes useful when there are two standard deviation terms that are difficult to identify (not saying that’s necessarily what’s going on here though) is to parameterize the model in terms of a combined standard deviation (i.e. the square root of the sum of the variances) and then a parameter p on the unit interval that allocates a proportion of the combined variance to one effect or the other.

I first encountered this trick in the BYM2 parameterization of the ICAR model, where the spatial and nonspatial variances can be difficult to identify and so are reparameterized in this way, but I’ve occasionally found it to help in standard linear mixed models, particularly if membership in one grouping (e.g. species) is strongly related to membership in another grouping (e.g. study), which is exactly what would make it difficult to attribute variance to one effect or the other. However, if this is what’s going on, you’d expect it to show up as a negative correlation joint posterior for the two standard deviation parameters under the “normal” parameterization. This reparameterization is useful for breaking that correlation, but otherwise is unlikely to help.

Thanks! I had not seen that.

In this case, it’s all test data where we generated perfectly balanced data – all species are in all studies and vice versa. For such a case I am trying to confirm that there should not be issues in separating out the variances. I personally think it should be fine, but my lab is having a bit of a debate.

I’m firmly on your side of the debate! But if there is a problem, then it should show up as strong posterior correlations between the variances, so maybe there’s a direct resolution to the debate available.

We’re still having a debate though on this issue of multiple modes, specifically whether these may be present because we are trying to separate out the variance of two separate effects (here: study and species). Signs here point to poor adaptation, but is there a way to also check for evidence of metastability or rule it out?

Perhaps the most important consequence of true metastability is that the parameter space will decomposes into non-overlapping “basins” of attraction (typically the neighborhoods surrounding each mode). Markov chains initialized in a basin will be confined to that basin, exploring the truncated posterior within, for many, many iterations. Often so many that you never see a Markov chain transition from one basin to another.

In this case each Markov chain should look like it’s exploring reasonably well, with fuzzy trace plots and reasonably small empirical autocorrelations. Markov chains initialized within the same basin should converge to the same exploration, and Rhat, or equivalent diagnostics, run just on those chains shouldn’t indicate any problems. Markov chains initialized in different basins, however, should converge to different explorations that trigger Rhat problems.

Because we usually don’t know where the basics of attraction actually are we can’t control these circumstances. All we can do in practice is

Separating out the variance of study and species with normal population models and a normal observational model will always yield a unimodal posterior distribution, I believe. The common issue here is not a discrete degeneracy (multiple modes which case metastable Markov chains) but rather a continuous degeneracy which is diagnosed and moderated in different ways. See for example the discussion in Identity Crisis.