What are the units of coefficients in an ordered-logistic model

Yes, these can be a bit tricky to interpret because they are not on the (possibly) numerical scale of confidence. You are quite right that they are in the latent scale, but since you used a logit link function, they are on the logit scale. The only difference between those two is that the assumed logistic latent variable has “fatter tails”: 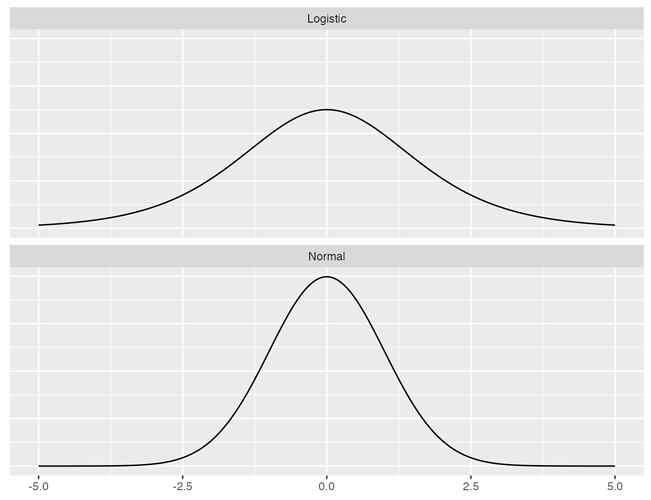 For practical interpretation, this difference doesn’t matter. In either case, it does make sense to talk about the coefficients, and you shouldn’t do any standardization (both link functions already assume a mean = 0 and dispersion = 1).

So what does e.g. x1 = 0.1 mean? You can think that a one unit increase in x1 shifts the entire latent distribution 0.1 units to the right. As a consequence, the probabilities with which responses fall to one or the other side of each of the thresholds shift such that greater response values become more likely.

Does that make any sense? If you’re familiar with the standard normal or logistic distribution, probably yes. But consumers of these analyses often are not. In those cases, you might consider calculating probabilities for the different response categories e.g. when x1 = 0 and when x1 = 1. You could then report e.g. that

Yes it does! thanks for the detailed explanation.

Converting to probability of response is very useful.

And I didn’t know that a logistic distribution is used with a logit link - thanks for the explanation! If I had wanted a normal distribution, I should have chosen a probit link?

Glad you found my response helpful 😊

Yes, if you want to assume a normal latent variable, you can use cumulative('probit') or cumulative('probit_approx'), with the latter being sometimes a little bit faster. The logit link function is usually better behaved though, and samples faster, so unless there’s a specific reason to use a probit, I recommend going with the logit. The probit link sometimes requires setting brm(..., init = 0) to sample though, so you can try that if it doesn’t seem to work.

If you want to look at different interpretations of the effect sizes in these models, this is a really nice and detailed blog post about that topic by @Solomon. (I am not sure if it applies to your specific model though.)

(If you think the answer above answered your question, feel free to mark it as the solution [there should be a little button somewhere]. We’re all just fishing for karma aren’t we 😉).