Why the simple linear model by Stan is not as good as lm in r?

Hi everyone! Sorry for sending a long message but I really need your help! My simple linear regression model in Stan cannot be as good as lm() model in r and I don’t understand why!

Below is my model in stan

There is no divergence when training the model. I try different priors for alpha, beta(s), and sigma but the RMSE doesn’t improve. The iteration time in Stan is 2000. (I also try iteration time = 500 or 5000, the RMSEs are still the same as 0.49.)

I attach some figures for reference: 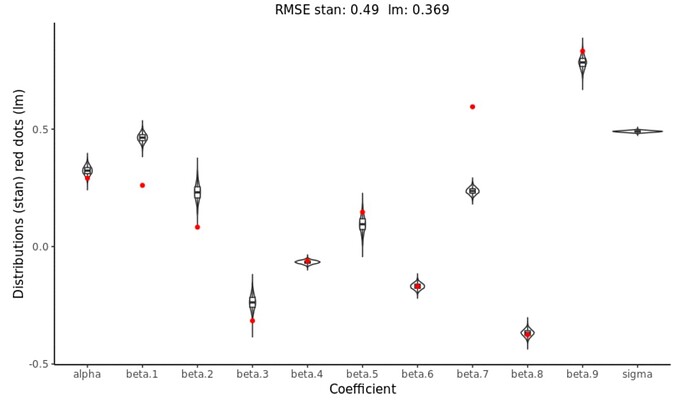 Below are some diagnostic plots using the bayesplot package. There is no divergence in the model so everything looks normal.
The plot from mcmc_parcoord 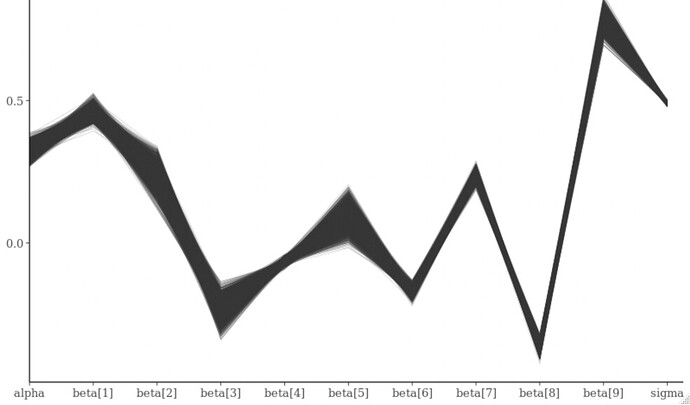 The plot from mcmc_trace for beta[7]: 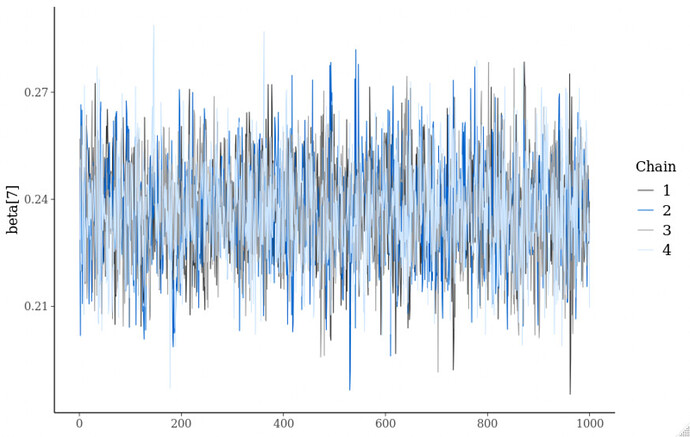 Hi, @Jianfeng and welcome to the Stan forums.

If you fit with optimization in Stan, you should get the same answer as lm gets in R, so I would check that first to make sure the data’s formulated the same way in R and in Stan. That is, check that the estimated coefficients and error term all match (error should be close, but not exactly identical because R divides by N - degrees-of-freedom, whereas Stan just fits the MLE and divides by N).

Even if the optimizers get the same answer, that doesn’t guarantee the MCMC result will be the same. MCMC point estimates are posterior means rather than posterior modes, and if there’s skew, they can be very different.

Assuming you are fitting with MCMC, how are you evaluating R-hat? Are you just taking the Bayesian point estimates (posterior means) and plugging them in? If so, you might want to try using posterior predictive inference instead.

I try different priors for alpha, beta(s), and sigma but the RMSE doesn’t improve.

In general, if the data’s generated from the model, the posterior intervals should be well calibrated (in expectation over multiple simulations).

Hi Bob! Thank you very much for your reply and abundant helpful information!
Below is how I extracted the paraments and calculated the predictions and RMSE:

I am not sure if I did the right thing…

And here is the code for R-hat and the output plot: 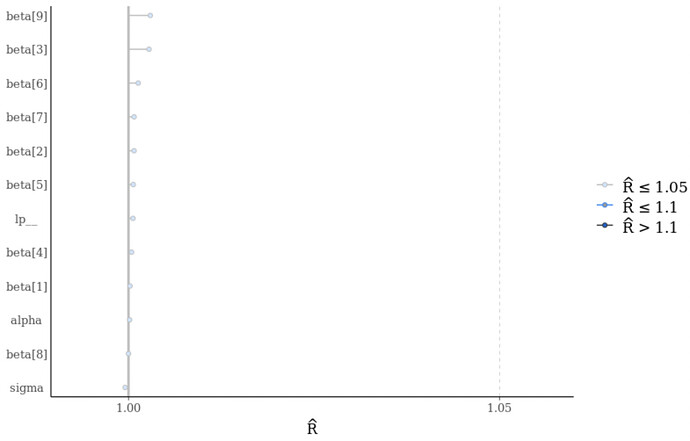 It looks good I think?

I am not sure if I did the right thing…

Me, either, but that’s because I don’t understand all the R you’re using. This isn’t the Bayesian way to compute this, but if everything’s linear, it will work out to the be the same. What you want to do is average the predictions over the posterior draws. But that works out to be the same in linear regression,

where the square operation is element wise. In general the mean for the Bayesian posterior goes on the outside, but because everything’s linear, it can go inside here.

If this isn’t coming out close in the two approaches, I’d suggest again comparing the posterior means in Stan and the fitted coefficients from lm and see if Stan’s optimizer gives you the same result as lm. If it doesn’t, then there’s something wrong in how you’re specifying the Stan model, because the answers for the coefficients should be identical.

You are right! I just made a stupid mistake when reformulating the data. Thank you again for your time and help!