There was a debate on one of the closed Stan Math PRs regarding the release notes. I didnt feel like having another long winded discussion so I took 15 minutes and did a first draft.

Thank you Rok!! It would be nice to have the PR # and person who submitted so we can give contributors props. That’s a bit tedious, tmrw I’ll see if I can write a script that grabs info for all the PRs merged since the last release. @syclik do you have something like that already?

Do we have any speedup graphs for the OpenCL code? I can write up a draft tomorrow for the more narrative release notes (unless Dan or Bob wants to take the wheel on that of course)

I can add PR numbers and names (github handles), thats probably a 5-10min job anyways. I will send you the slides with the speedups. Thanks!

I have no objections. I used to do it manually and it was more like 2 hours every release, but if you can do it faster, great!

Steve, nope. I did it manually using filters on the issues. Go for it!

It would be nice to have the PR # and person who submitted so we can give contributors props.

We used to try to link the commits at one point and give props to bug reporters and anyone not on the stan-dev list.

Automating all this sounds great, but until then, great on Rok for doing it manually! I don’t think anyone will object.

I used to do it manually

It started with Daniel and I doing all the triage and writing all the release notes by scrolling through the commit messages, issues, and PRs. That was a terrible process and we missed a lot of stuff.

There was a debate on one of the closed Stan Math PRs regarding the release notes.

At the risk of starting a debate, I wouldn’t have even called that a debate! The only issue in that discussion that touched release notes was whether they could be automated by including a special field in PRs.

I still think it’s good to have the end Stan user in mind when creating, editing, working on, and releasing issues in the Math library. Adding a release notes block that is to be written from the Stan user’s perspective would suffice.

I still think it’s good to have the end Stan user in mind when creating, editing, working on, and releasing issues in the Math library.

Do you mean “creating releases” instead of “releasing issues”?

I’m ok if we decide to adopt a general policy to state how an issue affects the Stan user (this may be left blank if it’s an internal change). One reason to not do this is because it adds yet another requirement on the person adding the issue / PR (wherever the policy is applied). There’s also an issue that the person writing the issue or code may not have the knowledge to write this down. In that case, what happens? Is the issue supposed to be rejected?

I used to do it manually and it was more like 2 hours every release, but if you can do it faster, great!

There were a bit over 50 PRs open since the last release, some of them were closed before merge. Most of the merged once I was either the author or the reviewer or they had a large enough effect on my work that I was aware of them. I only had to actually click on maybe 5 PRs. So I had it easy this time.

Thanks for those. Also added the Newton solver added yesterday. Will keep the top-level comment updated until the release.

At the risk of starting a debate, I wouldn’t have even called that a debate! The only issue in that discussion that touched release notes was whether they could be automated by including a special field in PRs.

That is fair. I just felt we circled around this in various places in the last few months.

I tried to tag all parties and mention their contributions. If anyone would like to change the wording lmk!

Steve this looks fantastic! I will do a more detailed look tomorrow, the text up top is light out.

Overall this is really really great. Thanks for doing it!

Here are my minor comments on the release notes.

PR #1180 brought the Intel TBB into Stan as a dependency, which we will be using in the future for CPU parallelism all across Stan! The TBB is an excellent framework that will let Stan utilize nested parallelism across the algorithms and gradient evaluations. On top of that, it also supports OpenCL interop, so we will start experimenting with integrating out OpenCL backend with the TBB. The licensing for the Intel TBB library is under the Apache 2.0 license. This dependency implies an additional restriction as compared to the new BSD license alone. The Apache 2.0 license is incompatible with GPL-2 licensed code if the software if distributing the software as a unitary binary. Refer to the Apache 2.0 evaluation page on the Stan Math wiki.

I would remove the “On top of that, it also supports OpenCL interop, so we will start experimenting with integrating out OpenCL backend with the TBB.”. I would focus on the features that are added as of now. And I feel that this steals the focus of TBB and may confuse users to connect TBB with OpenCL.

With @t4c1’s large contributions, we now have GPU/OpenCL support for many of our glm functions! With these additions along with @rok-cesnovar’s work on integrating OpenCL optimizations in the new stan3 compiler should give users a pretty big speedup for large glm models! @rok-cesnovar added an OpenCL reverse mode specialization for multiplication and mdivide_left_tri while @t4c1 added the OpenCL specialization for gp_exp_quad_cov .

The second sentence is not valid anymore as 2.21 will be using the exisiting compiler, so I would just remove it. And the first sentence should somehow note that gpu support is only available inside Stan Math and not to the cmdstan users so people dont get the wrong expectations. They will be available immediately once we switch to stanc3.

I (@Stevebronder) added a small type traits metaprogramming scheme so that we can make use of more generic templating in a lot of our code.

The sentence should start with “@Stevebronder added”. And the “small” her is not valid in my opinion. It was a huge effort and it helps developers a lot! Dont sell yourself short here!!

I would add a heading before the last paragraph with “Future”, “What is next?”, “A look at the next release”.

I would add a heading before the last paragraph with “Future”, “What is next?”, “A look at the next release”.

When reading through the text - which is really nice overall - I also thought that we should only focus on what we are releasing and not what we plan to do with it. I think that we should not include things like what we plan to do with these things in release notes. These forward directed things can certainly be mentioned in an announcement of the release, but release notes are just a record of what’s in it; for me.

Just want to tag @serban-nicusor as the release-performer so he’s aware - I think these folks would like to write the release notes for Math this time.

Thanks for the corrections!! I fixed up the release notes so the forward looking stuff is removed (and the stuff about the new compiler :-/ )

@serban-nicusor @seantalts As long as everyone else is cool with the release notes above then I think we want to use these for the release!

Looks good to me. @wds15 or @rok_cesnovar or @stevebronder (or?) - any of you want to write something up showing how much faster map_rect with threading is now for the Stan release notes and pick a favorite graph to link to?

We are now using TBB for threading in map_rect. With performance tests on a non-trivial map_rect model we have observed speedups of up to 20% on Windows, 70% on Linux and 30% on MacOS. Speedups were observed for both Intel and AMD CPUs. On MacOS we observed 25-30% speedups even for single threaded models when using tbbmalloc.

We can remove the last line if you find it confusing for users. I feel that MacOS users could really benefit here by simply turning on CXXFLAGS= -DSTAN_THREADS. But that doesnt need to be a part of the releases.

As for the chart I like this one from Steve (I think its a 12-core AMD CPU): 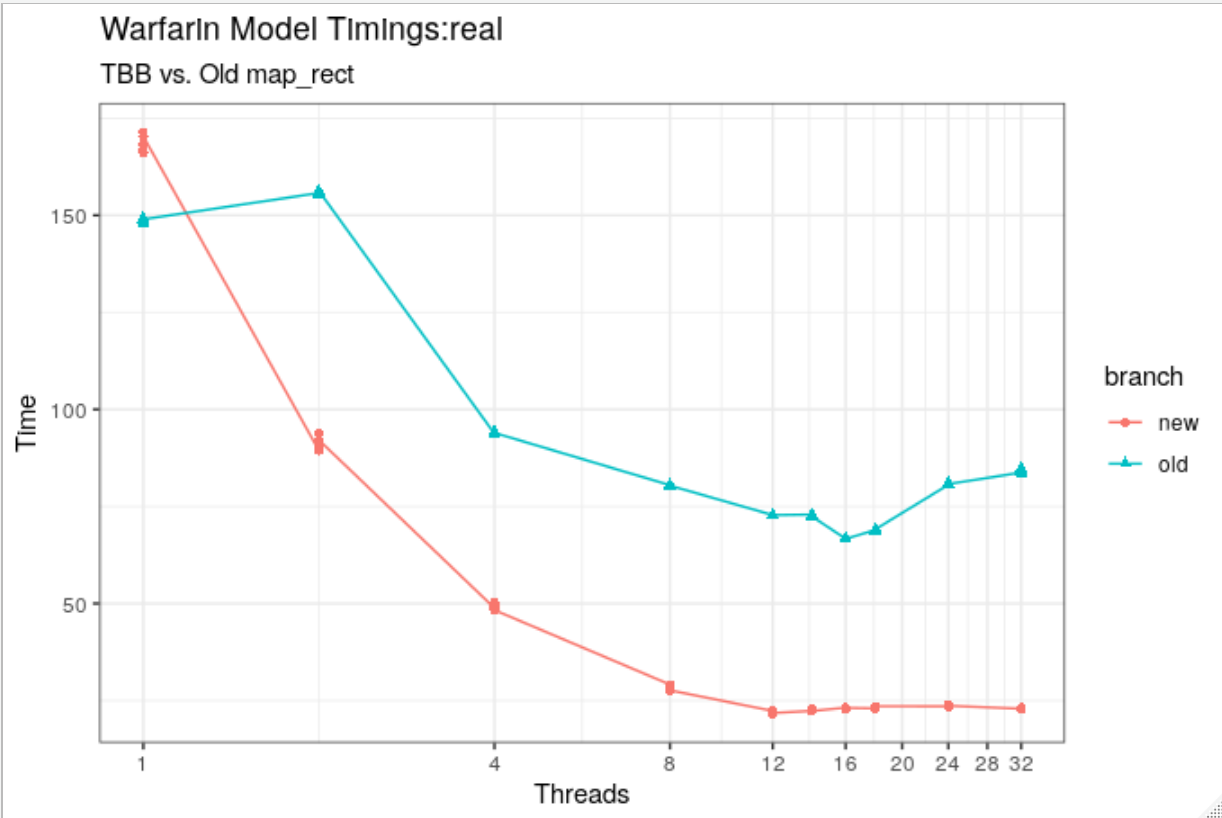 Side note and way to late now but why do we not have something like STAN_THREADS=true like we do for OpenCL? I find that much simpler to explain and use.

We should add that :)