This is my first time posting to this forum but I am hopeful someone here can help me understand the difference between the functions posterior_epred() and posterior_predict() in the context of mixed effects modelling.

These functions are used in various Bayesian R packages (e.g., rstanarm, brms, marginaleffects, brmsmargins) but it is not clear to me how they differ and, most importantly, when to use one versus the other in a mixed effects modelling context.

I tried to get some insights via Twitter, which were helpful, but I find I am still confused about this. (My mind likes to complicate things and it’s entirely possible that this issue is not as complicated as I make it out to be.)

“Extract the posterior draws of the linear predictor, possibly transformed by the inverse-link function. This function is occasionally useful, but it should be used sparingly: inference and model checking should generally be carried out using the posterior predictive distribution (i.e., using posterior_predict).”

Prior to reading the above statement, I thought that posterior_epred() is used to compute the expected value of a response variable on the natural response scale for given predictor values and with all random effects in the model set to 0. Furthermore, I thought that posterior_predict() is used to predict new response values based on known predictor values and specified values of the random effects. But the strong wording about using the posterior_epred() function sparingly stopped me in my tracks.

(Note that I am using terminology like estimation and prediction that I feel familiar with in a Frequentist context - in a Bayesian context, it seems to me that the distinction between the two is lost and everything is referred to as prediction.)

Inspired by Twitter, I went as far as to put together a table which lists several estimation and prediction scenarios I could think of in the context of a relatively simple linear mixed effects model. As a practitioner, I would really love to know whether I should posterior_epred() or posterior_predict() for each of these particular scenarios: 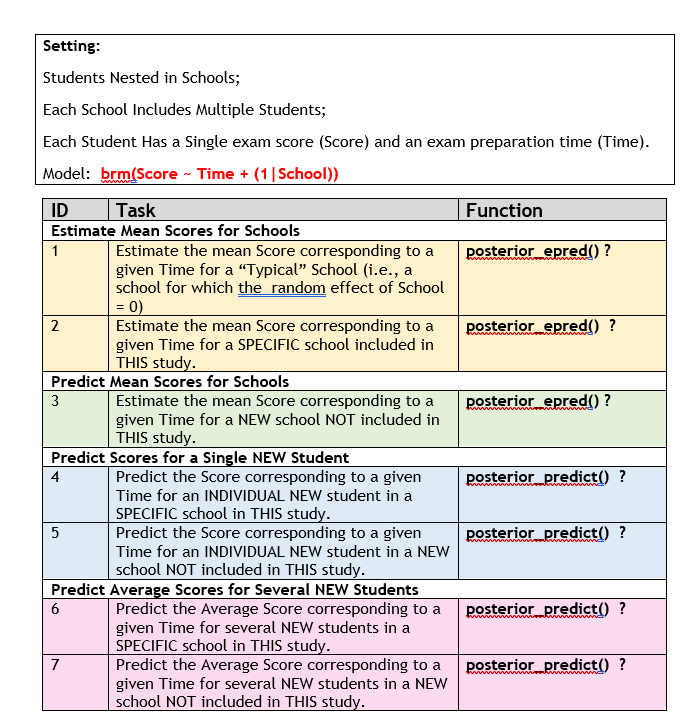 Any answers on the above questions and clarifications on the above table (i.e., what function to use for each task) would be much appreciated.

At this point, I am starting to believe that I shouldn’t even bother with posterior_epred() and should just consider posterior_predict() for every single scenario in my table (based on the help file mentioned above and on some of the responses I received on Twitter). But I would like to understand a bit more why if that is at all possible.

Thank you very much!

The distinction between epred and predict is always whether you are talking about the distribution (uncertainty) of individual cases (predict) or the average/expectation (epred). Eg, in the context of a single-level normal regression model, does the distribution include just the uncertainty in the mean/average/expectation (epred) or also the individual-level variation (sigma) and its uncertainty (predict)?

In a mixed effects model, there is the complication that we have both individuals and groups. The choice of epred vs predict only concerns “individuals vs average/expectation”. It has nothing to do with groups or group effects. predict there concerns the distribution of individuals within a group. epred concerns uncertainty in the average of a group.

At a purely computational level, with a normal likelihood, epred vs predict is just a difference whether sigma and its uncertainty is included in the distribution vs not. Random effects handling doesn’t differ between the two. That’s the re_formula argument.

“predict” has little if anything to do with “new observations” vs “observed data”. Both epred and predict describe post-data, model-implied uncertainty. They are model implied uncertainty in the average (epred) or individual cases (predict). The same applies in frequentist and Bayesian modeling.

Thanks for a great question and an excellent response.

I am curious to know if this is a correct interpretation of your answer, but my take is that it boils down to the scientific discipline. My background is in cognitive psychology, where the average/expectation (epred) matters more (my understanding of the discipline). However, in the field of motor learning and biomechanics, it is more accepted that there are different solutions to accomplish the same goal/task. For example, in alpine ski racing, there is a considerable variation in techniques, even among the best skiers. Therefore, although it is interesting to look at the average/expectation (epred) solution/response, it is (perhaps) even more interesting to talk about the distribution (uncertainty) of individual cases (predict).

I am trying to understand the different philosophies and relate that to my research. Is my interpretation reasonable?

It really comes down to whether you want to compare the groups only in terms of their average tendencies or more completely in terms of the distinctiveness of their distributions overall. For example, in cognitive psychology, I think often conclusions have been overly strong because they have only looked at mean differences in (log)normal variables and ignored the huge overlap in distributions across conditions. Much of the research on gender differences in differential psych has this problem, for example.

Now, sometimes a posterior_predict distribution isn’t really that useful (e.g., for a bernoulli likelihood, the prediction interval is always 0-1 because the response is binary), but for non-categorical outcomes, I think posterior_predict is usually more appropriate for giving a more accurate sense of the size of effects and their consequences in my opionion

Thanks @bwiernik. That makes sense.