My understanding is that when fitting hierarchical models, Stan by default initializes all of the parameters to the interval [-2,2] on the unconstrained scale. So for example, if we write down a model like:

then in particular each element of v will be initialized from a uniform distribution on [-2,2].

When initialized in this way, however, the probability mass for mu conditioned on v becomes heavily concentrated near zero. And so we might expect independent HMC chains to all pinch through a region around mu = 0 , even though the posterior distribution for mu in this example is ultimately normal(0,10). Indeed, that seems to be exactly what happens:

Now admittedly this is a silly example, because it uses very poor tuning of the sampler, and there are obviously no pathologies that could pose an issue for sampling if we run this thing for long enough to pass diagnostics.

However, in applications involving complex real-world hierarchical models, it seems problematic(?) if, when we think we have provided overdispersed inits for mu, effectively we have not achieved that. As a Stan user, it’s easy to circumvent the problem (if it’s even a problem) by specifying overdispersed inits for mu and sigma, and then simulating inits for v outside of Stan based on the initial values of mu and sigma.

My three-part question (below) really boils down to whether it is worth worrying about any of this:

Could this be related to why the non-centered parameterization came about? If you do:

There’s no longer the pinch in the plot: 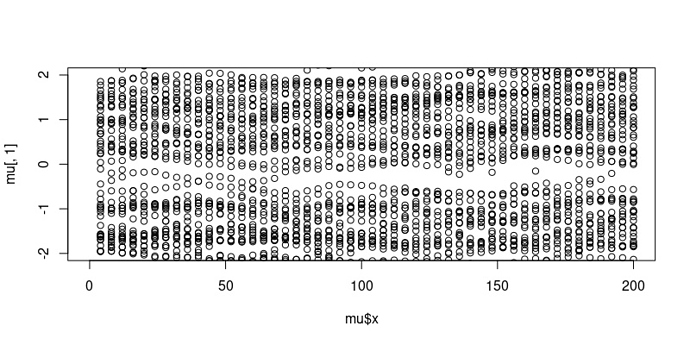 That’s a very cool benefit of the non-centered parameterization! When we non-center, we are no longer initializing the elements of v on [-2,2] but rather we are initializing mu and sigma and simulating v down from the distribution implied by our inits for mu and sigma. I had suggested doing this outside of Stan and then passing the inits explicitly, but I had overlooked the native Stan implementation of the same thing (achieved by non-centering).

I’d still be curious about thoughts regarding the general importance of choosing overdispersed inits. After all, sometimes the centered parameterization is better-behaved than the non-centered.

I’m out of my depth on this one; @martinmodrak who might be a good dev to tag to chime in on an MCMC initialisation topic like this?

Does this community agree that effectively I’m not getting overdispersed inits on mu?

I think think this is a definitive yes.

Are overdispersed initial values important in Stan, or is their usefulness superseded by well-tuned NUTS and HMC-specific diagnostics?

My guess here (not really an expert) is that:

Even with garden-variety MCMC, for a multi-modal model four chains seems like an awfully small number to yield a near-certain chance of initializing at least one chain in the basin of attraction of a different mode, especially if the posterior is high-dimensional. Are overdispersed inits really all that effective for diagnosing problems in the first place (as compared to initializing multiple chains in the same region of parameter space)?

That’s definitely an issue. However note that multimodality gets (usually) detected not only if you init in two different modes, but also if the other mode is discovered during warmup and the chain then adapts to the mode or when a chain attempts to traverse between the modes during sampling (in which case it often creates a divergence). So your odds are often no that terrible. I don’t doubt you could manufacture models with two very distant modes where the traversal is impossible, there are no divergences and one of the modes is very hard/impossible to hit by inits, but I would guess such models are quite rare in practice. Most multimodal models I’ve dealt with had the multimodality arise due to a simple symmetry or just one or two parameters.

For any more depth, I would defer to @betanalpha

There are a few independent concepts being discussed here.

Firstly the Stan program being presented here implements hierarchal model that manifests a funnel degeneracy. The strong, nonlinear interactions inherent to the funnel are too much for just about every MCMC sampler (and limit the accuracy of non sampling-based computational methods). As @mike-lawrence notes this can be remedied with a non-centered parameterization of the same model. I am nearly completing of a hierarchal modeling case study that goes into gory details; it should be publicly available sometime next month.

In other words if the Markov transition is effective then Markov chains can expand from a narrow initialization range to explore the entire typical set of the target distribution. If the Markov chains don’t expand then either the typical set is contained within that range or the exploration was obstructed; there’s no way to differentiate between those two possibilities empirically. On the other hand if the Markov chains all contract into the same neighborhood much smaller than the initialization range then we’re less likely to have missed something.

If all of the Markov chains equilibrate to the same behavior then there are no indications of problems within the scope of the initializations .

I need to remember this more often; especially for those models (admittedly from years ago before I could expect myself to know better) where I “solved” my sampling problems by setting init=0 😬

Playing around with initializations is dangerous but sometimes necessarily.

For example when the evaluation of the target density is fragile at more extreme model configurations (ODEs become stiff, power series converge too slow, etc) Markov chains that stray too far can become unstable and unusable. Initialization within the stable regions can avoid numerical problems but that will compromise the statistical validity of the Markov chains unless the unstable regions have negligible probability. It’s up to the user to verify that.

Another example is multimodal likelihood functions – priors can suppress extraneous modes but they can’t remove them entirely. Initializations near an irrelevant mode will tend to get the Markov chains stuck near that mode regardless of how little probability that mode captures. Custom initializations can avoid these extraneous modes but again it’s up to the user to verify that they are in fact extraneous.

Another example is multimodal likelihood functions – priors can suppress extraneous modes but they can’t remove them entirely. Initializations near an irrelevant mode will tend to get the Markov chains stuck near that mode regardless of how little probability that mode captures. Custom initializations can avoid these extraneous modes but again it’s up to the user to verify that they are in fact extraneous.

I think I am actually encountering this right now in a model discussed here. At least, in that case I find that initialization at/near the MLE of the parameter space keeps things from going haywire, but I’m still working out why they go haywire specifically in the case of having more data in the first place.