I can fit a distibutional model with brms like this (example from Estimating Distributional Models with brms):

prior_summary(fit1) says that the default prior for sigma_intercept is student_t(3, 0, 2.5) and that for the group effect, it is (flat).

How do I interpret these priors? brms fits log(sigma) with the linear predictor ~ 1 + group. Do the priors correspond to log(sigma) or to sigma? and what about the prior for the group effect on sigma?

just like any other family with a link function… the priors are for the linear model specified for log sigma.

how about you call brm with the argument sample_prior=“only”. Then you get a plain sample from that thing.

Good idea. I had to set a prior for b

epred_draws allow us to investigate what values are passed to the distribution.

How can I set a reasonable prior for log(sigma)?

How can I set a reasonable prior for log(sigma)?

The basic strategy is to experiment with different choices of priors on log(sigma) until you arrive at one that yields a useful pushforward on sigma. To speed up this process, you can examine the pushforward by sampling a bunch of random draws from a distribution directly in R (e.g. rnorm) and then exponentiating those and summarizing the result in tabular or graphical form. To get started, note that normal priors on log(sigma) are by definition log-normal priors on sigma, so if you think a log-normal might be a reasonable prior then you should be able to achieve what you want with normal priors on sigma.

To speed up this process, you can examine the pushforward by sampling a bunch of random draws from a distribution directly in R (e.g. rnorm ) and then exponentiating those and summarizing the result in tabular or graphical form.

Is that default prior someting that was overlooked (or postponed) when brms was extended to fit distributional models, or is it sometimes meaningful? (@paul.buerkner )

Your call to hist includes xlims that are applied after the breaks are computed, so you’re seeing only one bin really. Remove the limits to see the full distribution.

{ggdist} will also help you pick limits to see the bulk of the distribution. In your case its defaults won’t work well because the log-t distribution has such fat tails. The default for an infinite upper limit is the 0.999 quantile, which is nearly 30,000 for t(3, 0, 1), making the chart illegible: 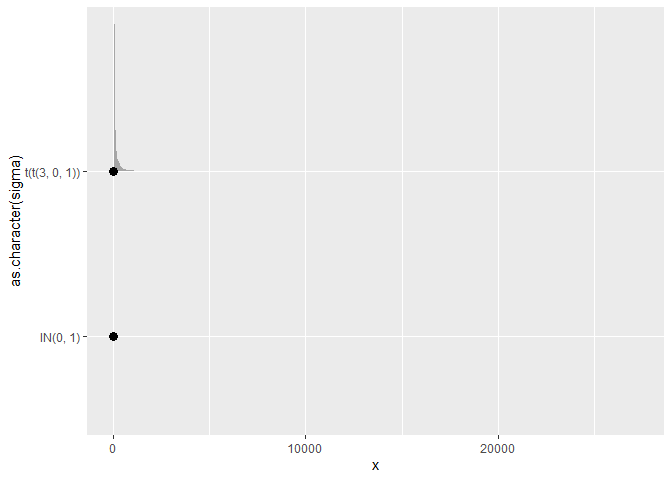 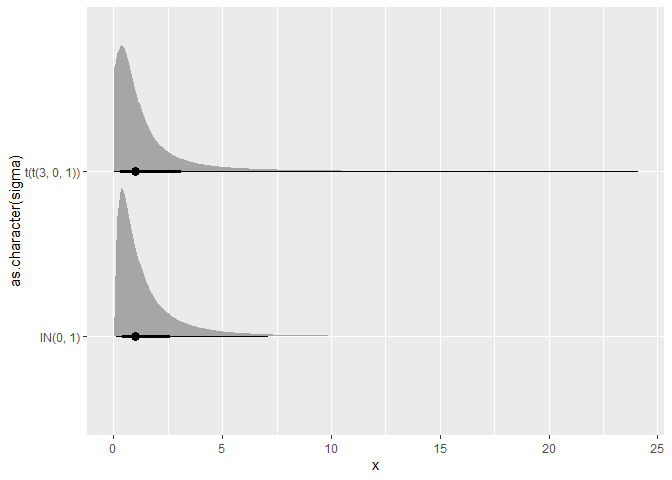 That is perfect. I had the idea that it should be trivial to draw the density of the exponent of a distribution (without simulation), but could not figure it out. I’m somehow glad that it does not seem to be entirely trivial :)

Is that a reasonable default prior, or is it something I should consider opening and issue about?

If I remove the sigma ~ group term, the default prior for sigma (now not log(sigma)) is simply student_t(3, 0, 2.5) with lb = 0. This seems like very different default priors for the distributional and non-distributional models, but I do not know whether the difference is important.

(I would have added a plot, but I could not figure out how to draw a “half student t”)