The sampling is terrible because that model is over-parameterized. Multiplying all elements of prop by a constant yields the same prop_soft , and because the target density depends only on prop_soft it will be invariant to such scalings. Consequently the target density will be non-identified and nearly impossible to completely sample.

If I’m not mistaking you are referring to that prop must have K-1 degrees of freedom. I have implemented the non-overparametrised model but we still get non-convergence.

Is it possible we are doing some trivial mistake in the implementation of the jacobian? 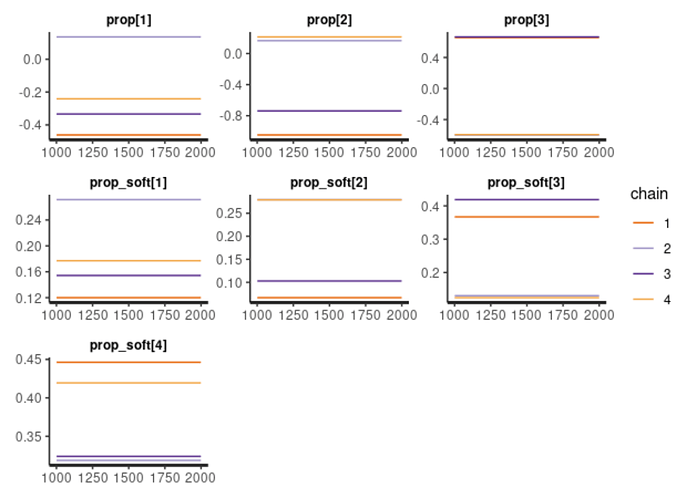 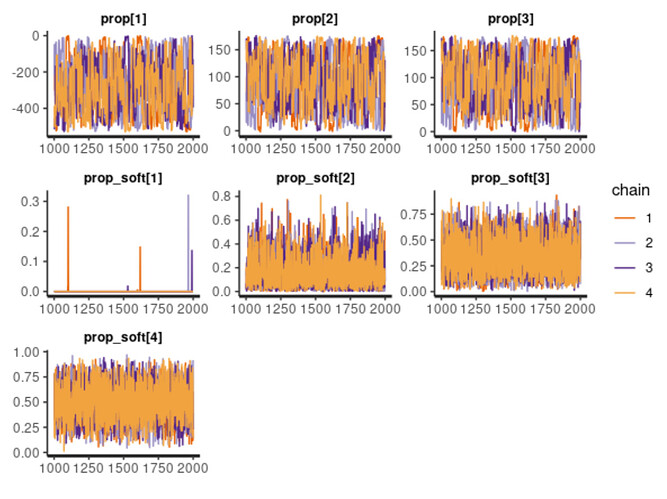 P.S. One of the goals of using uncontrained + jacobian implementation is to allow this model

To be more amenable to variational bayes, with the prop parameter being more symetric/normal-like

Something is definitely wrong in the first implementation – it looks like the adaptation is failing. It could be numerical problems. You’ll have to follow up with careful investigation of the diagnostics and Hamiltonian Monte Carlo statistics.

is possible that a typo happened?

No, they’re mathematically identical. The second form is just a more concise expression.

Consider the 2-element case as an example:

Which is the same as:

Which is what the loop with an identity matrix was expressing

With limited knowledge in Jocabians it comes hard to even “poke” the statement to see what part can cause such abrupt failure.

Where the Jacobian of the softmax s(x)s(x) is given by:

Could you please point me to a reference where the above is described? I will try to investigate a bit better and maybe try stackexchange

Sure, there are two references I used for this:

The Softmax function and its derivative - Eli Bendersky's website 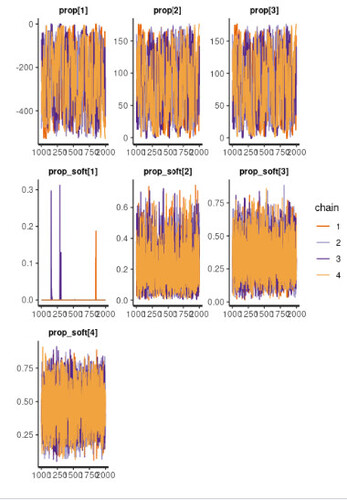 OK what is puzzling me that if I use this model with no jacobian, and with QR approach to N-1 degrees of freedom vector (Test: Soft vs Hard sum-to-zero constrain + choosing the right prior for soft constrain). 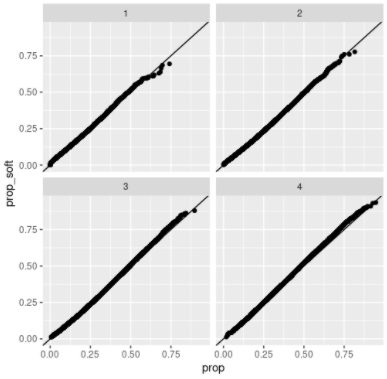 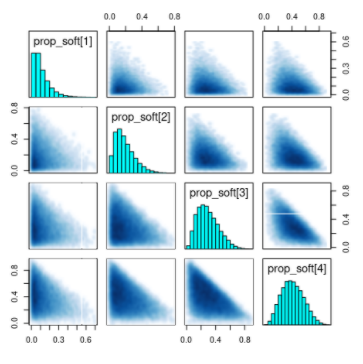 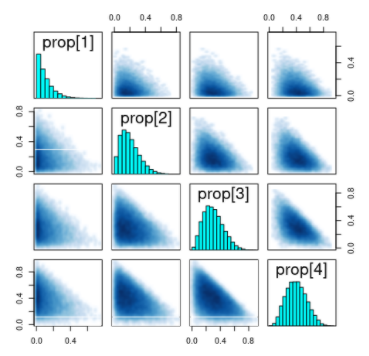 Then, when I add the simple jacobian everything goes crazy.

Actually I can see a bit of curvature compared to the comparison of two sampling of the source simplex model. 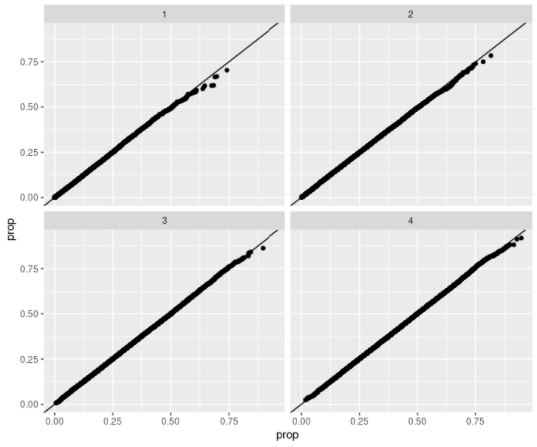 However the curvature seems rather small. 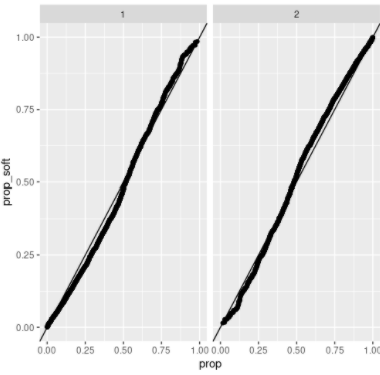 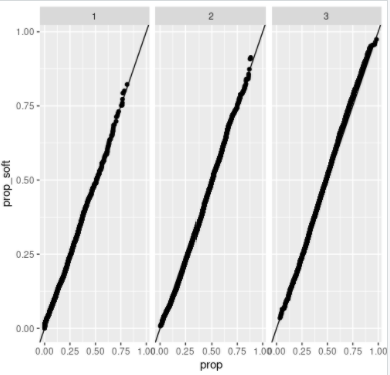 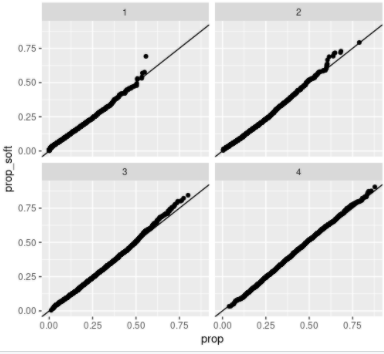 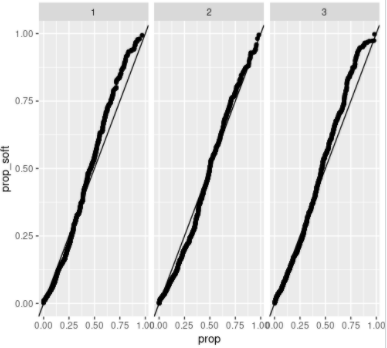 Anyway this was just a personal experiment that might be intersting for some.

@andrjohns I found this jacobian formula (https://arxiv.org/pdf/1712.09936.pdf). Could you please confirm if you think it is the same ot the one you know?

I have too many doubts about the notation to really have a clear idea.

Yep it’s the same. Noting first that the \odot symbol is used to represent elementwise multiplication, we can expand the operands on either side:

Which is the same as the formulas/methods above

@betanalpha is it possible the the whole mistake comes from the fact that we are mapping K-1 to a K vector? Although it is not the softmax that does that per-se, I though to just make sure.

Change of variables follows from probability theory which is airtight in what you can and cannot do.

One-to-many refers to the behavior of the transformation but still presumes the the dimensional of the input and output spaces are the same. The concept of a Jacobian determinant, and the corresponding transformation of density functions, is not well-defined when trying to map between spaces of different dimensions.

Hi! this is an old thread but, I’m trying to evaluate transforms this summer with bob, and I was just making a DIY softmax with stan, my code turns out to be similar to the one in this thread. I’m confused about what would be a good starting point to thinking about the Kth variable, like stickbreaking for simplex uses 1-sumoverothers i think. are there advantages to explicitly marginalize them?

One subtlety with these implementations is that even if the constrained space is symmetric constraining and unconstraining transformations need not be. For example with the stick-breaking construction of the simplex one has to choose an arbitrary ordering of the latent variables. This is also true for formally-identified softmax constructions.

Typically a softmax-simplex is identified by fixing one of the variables to a fixed value, usually 0 because that admits a nice probabilistic meaning in the right circumstances. In other words one introduces not K unconstrained variables but rather K - 1 variables and defines the first K - 1 states of the simplex as

and the last state as

As in the stick-breaking case the meaning of “first” and “last” here relies on the choice of an arbitrary ordering.

Without this state fixing the resulting simplex will be non-identified – an infinite number of input configurations will lead to the same output simplex configuration. In particular all of the input states can be translated by a fixed amount without changing the simplex variables,

then \pi(y_{1}, \ldots, y_{K} is uniform over the simplex. Integrating out one of the x_{k} is nontrivial, however, because that marginalization has to be propagated through the definition of the y_{k}. I have not seen this kind of approach implemented anywhere before.

thanks for clearing this up, this is really helpful, i was missing the intuition of identifiability somewhat earlier.

I have not seen this kind of approach implemented anywhere before.

Did you mean that for simplex/softmax/this particular transform or in general? since you mentioned that’s what we do in stan (I understand how the transform works from the docs but I find c++ somewhat difficult to follow so I’m asking)

Did you mean that for simplex/softmax/this particular transform or in general? since you mentioned that’s what we do in stan (I understand how the transform works from the docs but I find c++ somewhat difficult to follow so I’m asking)

Let’s be careful to separate out to similar but distinct concepts:

pushes forward the density function over the input space

to a uniform probability density function over the output space,

This is all to say that I have seen the y_{k} = x_{k}/ \sum_{k' = 1}^{K} x_{k'} transformation used in statistical applications before, but only in the particular instance of pushing forward a product of gammas density function into a Dirichlet density function. In other words it’s used just as a way of implementing a Dirichlet density function over a simplex, but not more general models over simplifies. That said it fundamentally suffers from the identifiability issue discussed above so even though it’s mathematically appropriate it’s terrible in practice without some additional heuristics to temper the identifiability.

If we’re talking about general statistics or probabilistic programming applications, however, then I haven’t seen y_{k} = x_{k}/ \sum_{k' = 1}^{K} x_{k'} used to implement simplices. All of the applications I have encountered have used the stick breaking construction or constructions equivalent to it (such as the hypersphere transformation I introduced way back in the day, [1010.3436] Cruising The Simplex: Hamiltonian Monte Carlo and the Dirichlet Distribution).