Hierachical model causing too much shrinkage?

I use population-wide, 12-year data for examining regional differences in rehabilitation use (zero-inflated, lognormally-distributed outcome variable).

I analysed the outcome variable with 2 models:

And compared these models’ findings with estimates calculated on raw data. 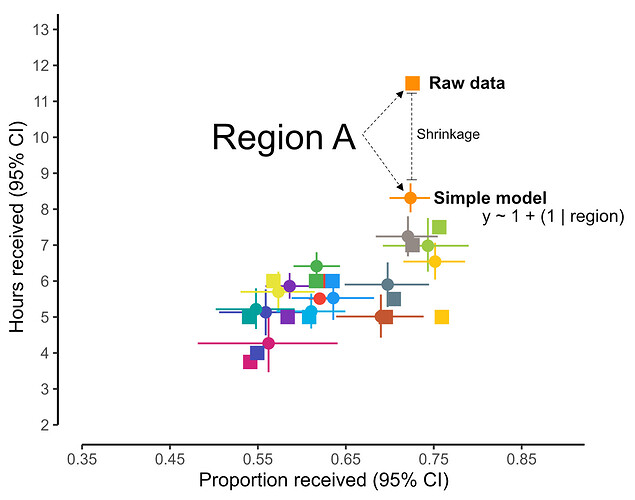 As you can see, shrinkage can be observed, especially for region A on the y-axis. Interestingly, this is one of the largest regions in the data. The same happens when I use a wider prior for sd intercept.

As I have population-wide data and background knowledge, that this region is better than others, should I avoid using a hierarchical model for the analysis? As you can see, there are 3-fold regional disparities without shrinkage (raw data) and 2-fold disparities with shrinkage.

Any thoughts? Any recommendations?

Thanks! But how could I specify a prior only for the particular grouping variable level, meaning region A? This would correct the shrinkage. What would be the code for this?

how could I specify a prior only for the particular grouping variable level, meaning region A

The random effect is the prior on the regions, so unless I am misunderstanding you, you are asking about taking region A out of the random effect? Then it won’t be informed by the other groups, but it also will not be able to inform the other groups. Is that what you intend? I’m pretty sure you can achieve this in a principled way in brms, but I’ll need to have a think about how. The hackish way to do this, if you want a very weak prior on A, is just to add a fixed effect for membership in group A with a very weak prior. This will prevent A from sharing information with the other regions via the random effect term, but requires that you use a (potentially unreasonably) weak prior on A.