I would like to give upper and lower bounds to a parameter matrix with a matrix of same size provided in the data. Is this possible ? The code below is not working with error “Expression denoting real required; found type=matrix.”

thank you in advance

I would like to give upper and lower bounds to a parameter matrix with a matrix of same size provided in the data. Is this possible ?

No. You would have to declare a primitive matrix in the parameters block with scalar bounds like

and then, in the model block, at each trial i, having rad ~ von_mises(0, kappa)

that would permit evaluate just one ‘rad’ instead of the whole sequence of trials values for rad, but obviously they need to have a different value from each other at each trial because the perceived_stimulus_in_rad are different from one trial to another, and the sampling procedure has to take into account this whole sequence of trial differences

If you just declare a scalar rad that is a much more restrictive model then declaring rad as a matrix, in which case all the elements are going to be different from each other but between -\pi and \pi. You can declare perceived_stimulus_in_rad in either the transformed parameters or the model block, depending on whether you want to store it in the output.

thank you very much !

and then in the model block : rad[i,1] ~ von_mises(Stimuli[i,1], kappa)
without having this boundary issue ?

I think that is legal syntax, but I am not sure it makes sense. rad[i,1] ~ von_mises(Stimuli[i,1], kappa) just adds the log-prior onto target.

sorry what does “If the location µ is not in
the center of the support, the density is circularly translated and there will be a second
local maximum at the boundary furthest from the mode. Ideally, the parameterization
and support will be set up so that the bulk of the probability mass is in a continuous
interval around the mean µ.” in the functions reference 2_22 document mean then ?

Not sure. Maybe it bunches the mass at the far boundary instead of wrapping around?

yes it seems that it’s exactly what it does, which is a problem 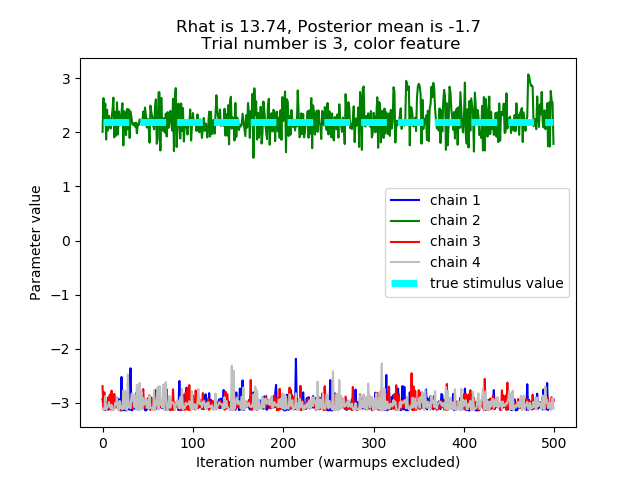 example in this image, where some chains were stuck at -pi