I would like to plot a single category of response from a multinomial model fitted using brms (version 2.17, Mac Monterey 12.6).

the plot with all five response categories looks like this: 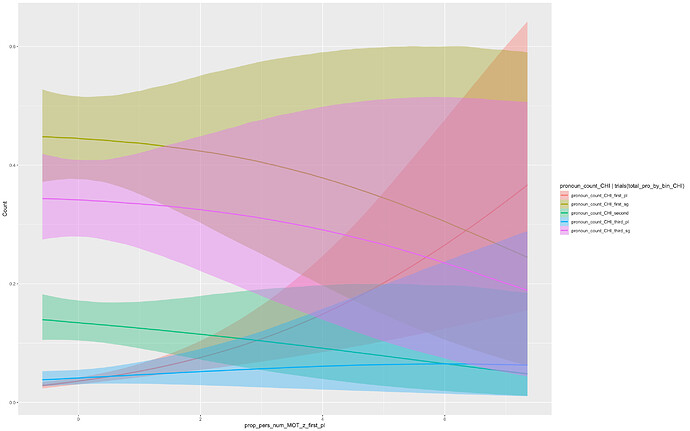 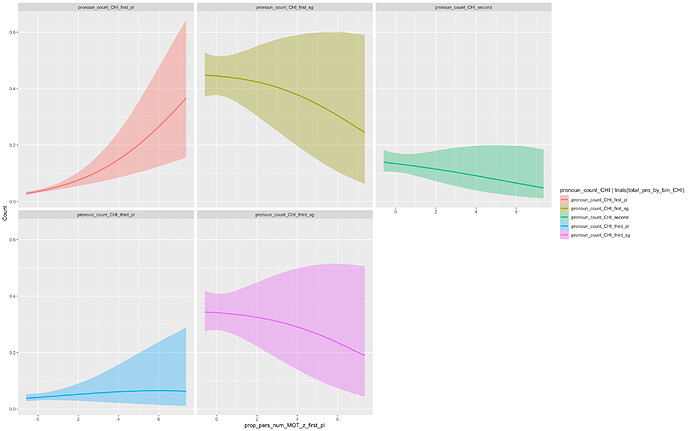 Essentially, I wish to produce only the top left plot (i.e., the level of “cats__” called “pronoun_count_CHI_first_pl”), and to not produce any of the other four plots.

but I receive error message “Error in UseMethod(“filter”) : no applicable method for ‘filter’ applied to an object of class “logical””.

Any help is greatly appreciated, thank you.

conditional_effects generates a list of data frames (one for each effect) that is then used as the data for the plots. I think if you update the relevant data frame(s) to keep only rows where the outcome is pronoun_count_CHI_first_pl then you’ll get a plot only for that outcome.

I don’t have your model, so I can’t test, but I think it would be something like this:

The result should be a plot with just the one outcome category instead of all of them.

The code you tried did not work for a few reasons: Most importantly, plot(conditional_effects(... creates a plot using the data frame(s) generated internally by conditional_effects. AFAIK, the data can’t then be externally altered after the plot object is generated (at least not without some hacking outside of a standard ggplot workflow).

There are also two syntax errors: First, filter is not a ggplot function and can’t be “added” to a ggplot with +. Second, if you could filter, the code would be filter(cats__ == “pronoun_count_CHI_first_pl”). Note that there are no quotation marks around cats__. “cats__” is a string that doesn’t refer to anything else. "cats__"==“pronoun_count_CHI_first_pl” is always false and will return zero rows of data (try, for example, iris %>% filter("Species"=="setosa")). On the other hand, cats__ is the symbolic name that refers to the object (a data column) we want to filter.

This worked exactly as I had hoped, thank you for the help and for the points about the syntax.