I wonder how I can find potential signs/evidence of multimodality posterior distribution. I tried to plot the bivariate distribution of MCMC samples for two parameters. The contour plot is shown below 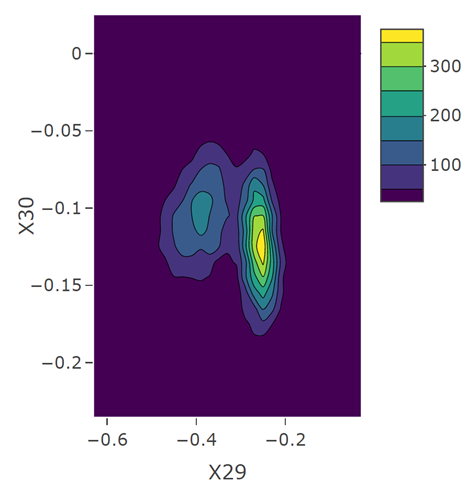 Thank you for your time!

As far having samples of a density that has more than one maximum, it is some evidence of multimodality; however, there are some nuanced aspects to it, in addition to the concept of multimodality not being a vey formal one (do you need strictly one peak, how big should the others be to count as additional peaks, etc). Some things to consider:

Thank you so much for the detailed explanation. It’s very helpful.

Is the effective sample size large enough that the distributions are we characterized?

I looked into the output. And found that the effective sample sizes for these parameters that have multimodal posterior distribution are all comparative smaller than other unimodal parameters in the model.

Thank you again for your answer.

Without thinking too much I’d say no (but maybe someone else thought things like this through and has a better assessment); it’s a bit like proving a negative – if you don’t have enough samples you cannot really make confident statements either way.

Still, while the samples are random (and correlated draws), the likelihood/posterior function is fixed so the values computed will not change; instead what may happen if you drew more samples and get a better resolution on the surface is that you may find that the “peak” is sharper, flatter, or not a peak at all.

Thank you for your answer.

the likelihood/posterior function is fixed so the values computed will not change;

That’s a statement about the likelihood function conditioned on the data \mathcal{L} = p(\theta|D) not the approximation of it you manage to sample and the associated convergence metrics like \hat{R}. For a given data set \mathcal{L} it’s fixed for any choice of parameter values.

I looked into the output. And found that the effective sample sizes for these parameters that have multimodal posterior distribution are all comparative smaller than other unimodal parameters in the model.

Multimodality in the posterior density function itself isn’t a problem. The real problem is that most samplers have trouble fully exploring across the multiple modes, at worst getting stuck in quasistatonary exploration around a single mode and at best slowly moving between the two modes, which compromises the accuracy of the posterior quantification.

Here you can see multimodality manifest in the variable X29, but there not enough information to know how the sampler is performing.

For example if the plot was generated from a single Markov chain then the sampler is able to jump between the modes but only slowly. This will result in accurate but imprecise computation, with large autocorrelations and low effective sample size for the variable X29 relative to X30.

On the other hand if the plot was generated from a collection of Markov chains then one will have to separate out the Markov chains to determine the sampler behavior. If each Markov chain concentrates around a single mode – and none cross between the two modes – then you won’t be able to determine the relative weights of the two modes. In other words your posterior computation will be inaccurate. Sometimes you’ll see Rhat warnings in this circumstance but it’s not guaranteed.

If each Markov chain in the collection is able to transition between the two modes then you’re back in the “accurate but imprecise computation” case and your only option is to run your Markov chains longer to better resolve the posterior structure.