Hi everyone. First of all I want to say how much I love brms. I use it for so much now: including non-linear hierarchical models for my PhD, Bayesian meta-analysis, and other Biostatistics stuff. I couldn’t possibly imagine how I could I have conducted my research without it - so a big thanks to Paul for making my life so much easier.

Was wondering if someone could help me. I am trying to implement a hierarchical model specifically in brms to predict football results over a Premier League season. The idea is taken from the Stan’s video on Hierarchical Modelling in Stan: Predicting the Premier League.

This model itself is loosely based on the paper describing a Bayesian hierarchical model for the prediction of football results by Baio and Blangiardo in 2010. This is inspired by a project by Theo Rashid; you can see his work here and his website is here.

I am trying doing this to try and work backwards to understand how brms uses its multivariate syntax and how it works when specifying more complex multivariate models (i.e. those models that cannot just use mvbind). I have read the excellent vignette here, but I am still a bit confused, particular when it comes to setting priors for the model.

The vector of observed responses predicts the final match scores, and is modelled as a bivariate vector \pmb{y} = (y_{home}, y_{away}) is modelled as independent Poisson:

att_{h(g)} is a parameter that represents the home (denoted by h) teams ability score goals, whereas def_{a(g)} is the “defensive” ability of the away team
home represents a home advantage intercept. 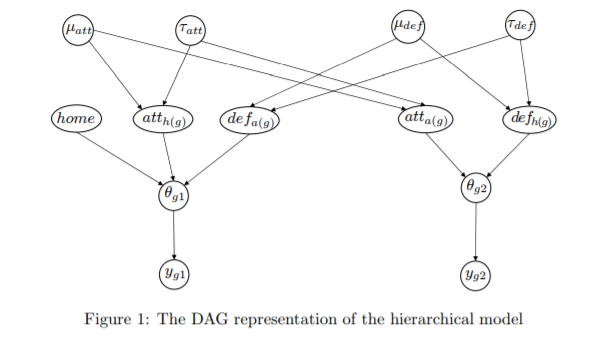 Ok so now for brms! Ideally I’d like to specify the same model in brms (although I understand that brms would implemenent a centred parameterization)

I thought the way to specify this is brms would be:

However when I tried to edit the priors with:

Then I get this:

The priors don’t match what I had expected. Can anyone help me figure out how I would specify a model like this with brms so that the model would be the same (although reparameterised) as Maggie Lieu’s stan code?

Thanks so much for your help!

And the code for prepping the data is here:

Is anyone able to help with this question? thank you so much!

Hi,
I think the main problem you are encountering is that brms doesn’t let you share coeffcients between the two formulas, so (1 | HomeTeam) for scorehome is NOT the same coefficient as (1 | HomeTeam) for scoreaway. You can partially work around that by using the non-linear syntax Estimating Non-Linear Models with brms • brms (which completely changes how brms behaves, but let’s you explicitly control which parameters/coefficients appear in formulas and thus should let you share coefficients). But I think at that point you are mostly working against brms and it is quite possible that the benefits of using brms will be outweighed by the problems this will cause and using pure Stan could thus be a better choice.

Many thanks for this @martinmodrak. I had suspected as much regarding the coefficients. I did feel like I was “working against” brms on this. It’s partially because I had an conversation with a colleague where I was convinced that I could get brms to run a bivariate independent DAG in this way… however I am going to have to concede that is beyond my comprehension at the moment and more trouble than it is worth to do this outside of writing STAN code instead.