I am relatively new to Bayes, so I have probably made some mistakes!

I’m trying to calculate Bayes Factors and I would like to set some weakly informative priors, but I’m not sure what to use. The data are from a question-answering task, and I have RT (in ms) which is being predicted by the categorical variables question predictability, answer length, and their interaction. I also include question duration (in ms) as a fixed effect in the model because previous work shows it is a potential covariate. Note that RTs are not transformed.

When I run get_prior on the model, it tells me there are flat priors on all the fixed effects:

Thanks for reading! Any suggestions would be greatly appreciated.

Sorry about the delay in getting to your question. Using the get_prior function will return the default priors that brms sets. RT models aren’t in my wheelhouse but there is a good discussion here on RT model and setting priors Advice on distribution for modelling reaction times? (and setting priors)

As for setting priors I usually think about what previous data or knowledge we have. Like if you know that as the answer length goes up, reaction time also increase you would want to set a prior that reflects this. Typically I comment the references for each prior directly into the code.

Thank you! That makes a lot of sense. How would I implement the effect size in priors? For example, if I expect the short answer length condition to be about 20 ms faster than the long answer condition, then how could I implement that in the brms syntax? I’ve tired things like normal(0, 20) but I don’t think that’s quite what I want because 20 ms is then the sd.

When I am working with different stakeholders I set priors with index cards, colored pencils or crayons. Like this: 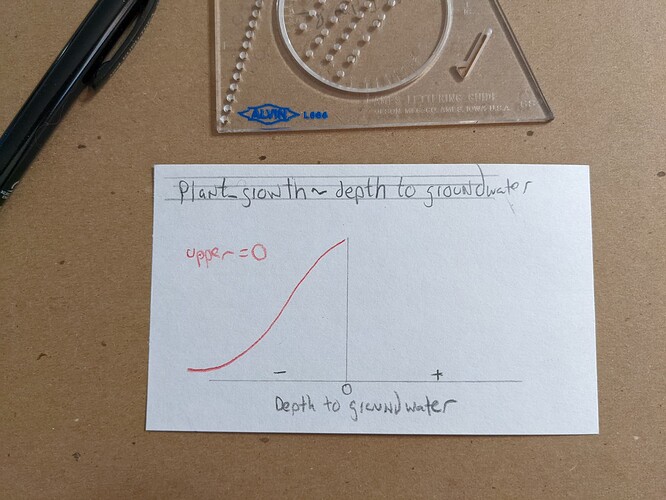 In other words I asked do you expect this predictor (coefficient or whatever your discipline calls them) to have a negative, positive, or centered around zero impact on y (rt in your case). Then we draw that out and write down the supporting information for that on the card.

So in the drawn example this particular plant drowns (bad for growth) in the riparian (river-y type system) zone as the depth to ground water gets more positive.