How to model a choice between 2 distributions

Hello! This is my first time posting on this forum so please go easy on me :).

I’m trying to understand the right way to describe a one-hot kind of model.

Each output datapoints is a vector of independent measurements. Every non-zero feature for every datapoint is either signal or noise, and there can only be 1 signal feature and the rest are noise.

I’m trying to figure out how to specify a model for this (one latent feature comes from one distribution and all others come from the other distribution). Would this be something like a logistic representation?

The next step will be to turn this into a mixture model. I’ll be at StanCon this year and I want to get a ways into constructing my model so I can get more out of the tutorials. 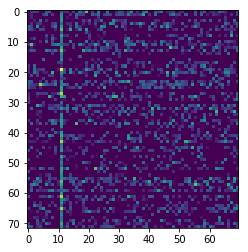 [Please include Stan program and accompanying data if possible]example_data.csv (123.0 KB)

The traditional way of doing this is to marginalize out the choice of model parameter. See the Stan manual section on “Change Point Models”.

I have coincidentally just written an alternative method to produce an approximate one-hot encoding solution that uses the Rebar distribution. See Finally A Way to Model Discrete Parameters in Stan and rebar/README.md at master · howardnewyork/rebar · GitHub

I do not think stan has a triangular distribution available so that would have to be manually coded.

If you define X to be a 70 element vector having a Rebar distribution (see github reference),where the i’th element is 1 for the signal feature and all other elements are zero for the noise, then you can write the likelihood statement as:

You can adjust the code to select two different families for noise and signal rather than just the Normal for both, but be careful to provide some structure, e.g. by setting the mean of noise distribution to be higher for one option, or use informative priors so as to avoid label switching errors. When I ran my code, it was still somewhat susceptible to label switching, so running a single chain rather than multiple chains is safer. I am not quite sure how to completely avoid this.

I also included optional code to use the standard marginalization approach. This approach gave unsatisfactory results. So it either just does not work very well or there is an error in the my alternative marginalization option code.

When I ran my code, it was still somewhat susceptible to label switching, so running a single chain rather than multiple chains is safer.

I also included optional code to use the standard marginalization approach. This approach gave unsatisfactory results. So it either just does not work very well or there is an error in the my alternative marginalization option code.

Please let us know, when you figure out which one is the reason. It would be helpful for obtaining evidence for usefulness of rebar.

I have written up the Rebar approach to solving this problem and it is described here. Finally A Way to Model Discrete Parameters in Stan

You can try both approaches, Rebar and Horshoe. I would be interested to find out which performs better on your actual data.

Thanks @howard. I’m working on adapting it now. I’ll let you know how it goes after I expand my example to multiple clusters.

We try to be nice to everybody!

I am assuming that the signal comes from a triangular distribution

Why? Is there something naturally generating a triangular distribution? We generally recommend softer priors (without hard interval cutoffs).

I’m trying to understand the right way to describe a one-hot kind of model.

As others have said, you need to marginalize the decision about which is the hot parameter. This is pretty straightforward. There’ s a chapter in the manual on mixture models, and this is similar.

Thanks Bob! Looking forward to meeting you at the conferences this week :).

Yes, I’ve moved over into the marginalized distributions based on the examples for the mixture models and they are treating me well so far. I’m still having issues with the ragged simplexes but, that’s a different thread.

I’m assuming a triangular distribution because my variables are linearly more likely based on the independent variable. For example, let’s say the number of potholes on a given street. If a street is twice as long it most likely has twice as many potholes. Do you think there is a better way to model this phenomenon? I’ve been trying to figure it out but so far a triangular probability seems to be the best bet.

If a street is twice as long it most likely has twice as many potholes.

Perhaps an exposure term in a Poisson? This is common with hierarchical count data—you model something like rate per capita hierarchically, then you model each region using a Poisson based on population, y[i] ~ poisson(population[i] * rate[i]), where population[i] is data here.

If you wouldn’t mind @Bob_Carpenter, could you expand on this exposure term a little more? I’m really struggling with imagining this for continuous variables.

Let’s say my data is 5 streets:

Often you model rates, like number of potholes per mile of road, say rate. Then for each road i, you have a length, length[i], then you’d model the number of potholes on road i as y[i] ~ poisson(rate * length[i]). With random effects, you might get varying rates rate[i] and give them a hierarchical prior, rate[i] ~ foo(...). Having a separate exposure term, here the length[i] term, which is data, lets you have the rate paramters all be on the same scale.

how can I capture the fact that there is a 50% chance that the pothole is on Street #5?

Are you literally trying to do this inference?

Then it depends on your model. But if it’s just simple Poisson with exposure, we happen to know because of the Poisson’s homogeneity that if u ~ Poisson(a) and v ~ poisson(b), then u + v ~ Poisson(a + b). This means the count is going to be proportional to the rate parameter, so you can just derive this result analytically. You don’t need sampling.

In general, to do Bayesian posterior predictive inference in the general case, you’d set up the five variables y[1], ..., y[5] for the number of potholes on each road, generate them in generated quantities, then take the proportion. That works for arbitrary distributions.